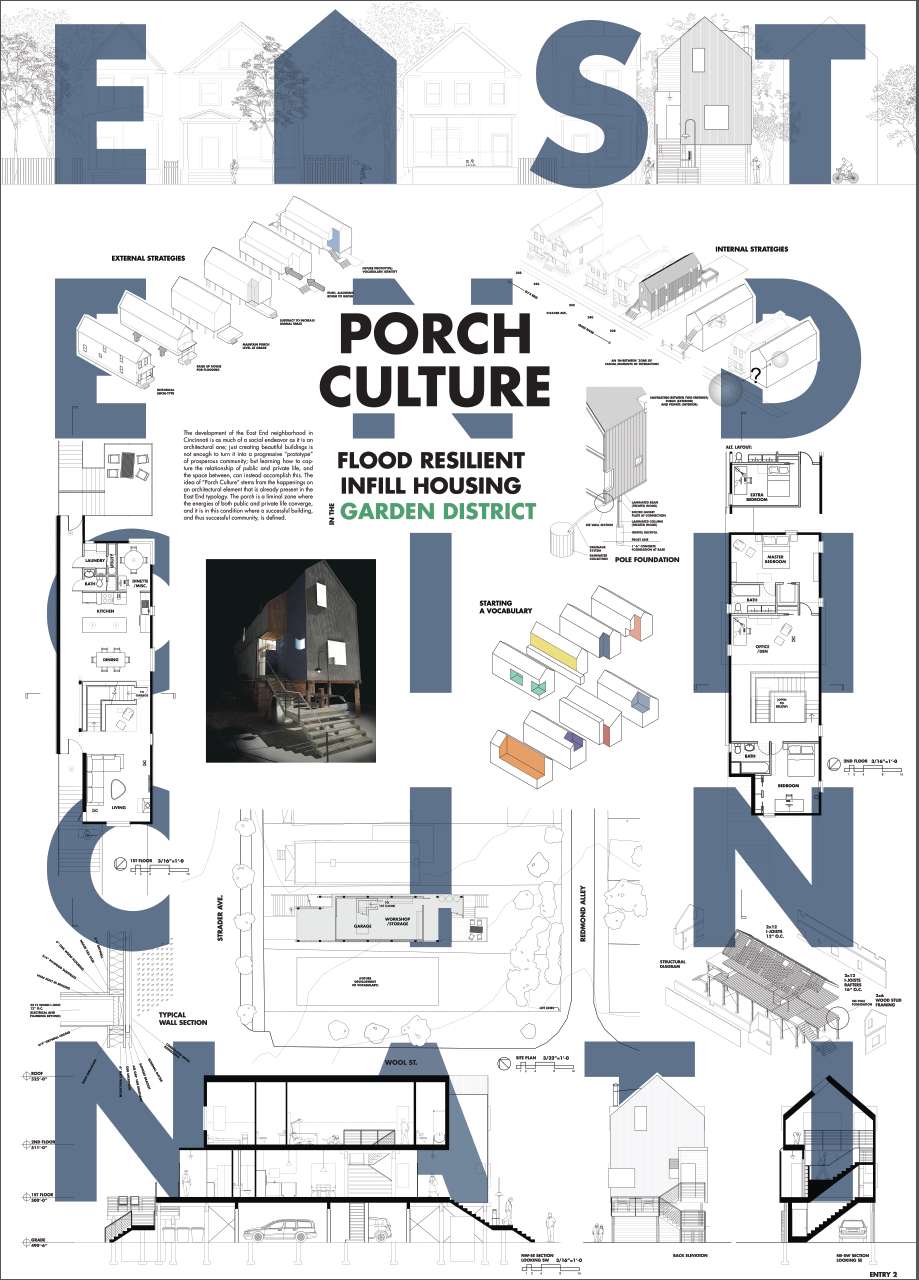 The development of the East End neighborhood in Cincinnati is as much of a social endeavor as it is an architectural one. Creating a beautiful building is not enough to turn a distressed neighborhood into a progressive “prototype” of prosperous community; but learning how to capture the relationship of public and private life, and the space between, can instead be the first step in trying to reach this goal. The idea of “Porch Culture” stems from the happenings on an architectural element that is already present in the East End typology. The porch is a liminal zone where the energies of both public and private life converge, and it is in this condition where a successful building, and thus successful community, is defined.

The vocabulary for this design proposal begins on parallel and then converging tracks, in terms of the interior and exterior conditions. Both spaces are developed in a corresponding, yet independent rigor, with the focus on congregating their forces in the threshold of the home’s entry.

Working inward out with the design of the house’s interior spaces, the main stair was developed to act as the node of private life. The simple program of this affordable two-three bedroom home revolves around the two-story, sky-lit atrium space. Collapsing the entirety of home’s features into view, the stair holds books for the office, equipment for the living room, pots and pans for the kitchen, wine glasses for the dining room, and connects the first floor to the garage level below. By creating this area of casual domestic interaction, the family is able to understand the boundaries of what space is meant for the individual, and what is for the group; reiterating the attitude of openness in private-life, an idea of which the East End prides itself, and one that is common in progressive America.

The exterior of the home maintains the datum of the porch level and setbacks currently existing, while also reaching the necessitated height for flood potential. The house addresses the street with a main walk up to the entry, as well as a driveway for parking the cars underneath. The house adopts the traditional gable form of the neighborhood, with a seemingly homogenous metal skin, a neutral hue reflecting and contrasting the large amount of green in the area. The individuality of the family shines through at porch level with an appearance of colloquial color. This neutral base with colorful reveal sets a lexicon easily mirrored in the rest of the East End’s development, creating an aesthetic that becomes surprising instead of monotonous; and begins to add the new identity of the ‘Garden District.’

The social strategy of the exterior is about interaction. Informal interaction happens when someone is unloading their groceries, checking the mail, or when taking out the trash; and by highlighting these moments in everyday life and creating opportunity for this type of communication, the exterior’s spatial arrangement creates translucency into the life of the family.

Porch Culture is about the constant dialogue between the public life of the exterior and private life of the interior. At no point is there any over-exposure to one or the other; a perfect middle ground of interaction is the mainstay of a successful community, and a model for which a new urbanized Cincinnati is striving.